I Know This Much Is True: A Novel (Paperback) 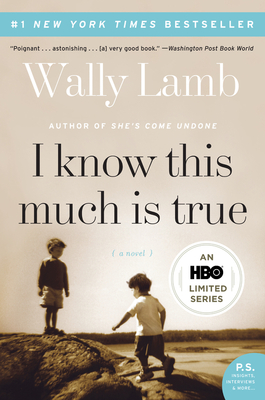 I Know This Much Is True: A Novel (Paperback)

"Thoughtful . . . heart-wrenching . . . . An exercise in soul-baring storytelling—with the soul belonging to 20th-century America itself. It's hard to read and to stop reading, and impossible to forget."  — USA Today

Dominick Birdsey, a forty-year-old housepainter living in Three Rivers, Connecticut, finds his subdued life greatly disturbed when his identical twin brother Thomas, a paranoid schizophrenic, commits a shocking act of self-mutilation. Dominick is forced to care for his brother as well as confront dark secrets and pain he has buried deep within himself—a journey of the soul that takes him beyond his blue-collar New England town to Sicily’s Mount Etna, the birthplace of his grandfather and namesake. Coming to terms with his life and lineage, Dominick struggles to find forgiveness and finally rebuild himself beyond the haunted shadow of his troubled twin.

I Know This Much Is True is a masterfully told story of alienation and connection, power and abuse, devastation and renewal—an unforgettable masterpiece.

Wally Lamb is the author of five New York Times bestselling novels: She’s Come Undone, I Know This Much Is True, The Hour I First Believed, Wishin’ and Hopin’, and We Are Water. His first two works of fiction, She’s Come Undone and I Know This Much Is True, were both #1 New York Times bestsellers and selections of Oprah’s Book Club. Lamb edited Couldn’t Keep It to Myself, I’ll Fly Away, and You Don’t Know Me, three volumes of essays from students in his writing workshop at York Correctional Institution, a women’s prison in Connecticut, where he has been a volunteer facilitator for two decades. He lives in Connecticut and New York.

"Thoughtful...heart-wrenching....An exercise in soul-baring storytelling--with the soul belonging to 20th-century America itself. It's hard to read and to stop reading, and impossible to forget." — USA Today

“A gratifying saga of loss and redemption.” — People

"[A] tour de force that sweeps the reader along in its swift emotional current....A work of astonishing craftsmanship, structural symmetry, and literary self-awareness...Read it and weep." — St. Louis Post-Dispatch

"Never grapples with anything less than life’s biggest questions. . . . Lamb clearly aims to be a modern-day Dostoevsky with a pop sensibility." — New York Times Book Review

"Every now and then a book comes along that sets new standards for writers and readers alike. Wally Lamb's latest novel is stunning--and even that might be an understatement...this is a masterpiece." — Lisa Ko, author of The Leavers

"The saga of the century. Best, most wonderful, most dramatic, most powerful. There are no superlatives impressive enough to describe this, another Lamb masterpiece." — Oakland Press