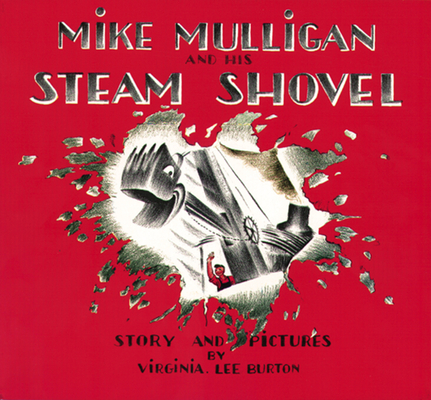 A modern classic that no child should miss. Since it was first published in 1939, Mike Mulligan and His Steam Shovel has delighted generations of children.

Mike and his trusty steam shovel, Mary Anne, dig deep canals for boats to travel through, cut mountain passes for trains, and hollow out cellars for city skyscrapers.

But with progress come new machines, and soon the inseparable duo are out of work. Mike believes that Mary Anne can dig as much in a day as one hundred men can dig in a week, and the two have one last chance to prove it and save Mary Anne from the scrap heap.

What happens next in the small town of Popperville is a testament to their friendship and to old-fashioned hard work and ingenuity.

Virginia Lee Burton (1909-1968) was the talented author and illustrator of some of the most enduring books ever written for children. The winner of the 1942 Caldecott Medal for THE LITTLE HOUSE, Burton's books include heroes and happy endings, lively illustrations, and a dash of nostalgia. She lived with her two sons, Aristides and Michael, and her husband George Demetrios, the sculptor, in a section of Gloucester, Massachusetts, called Folly Cove. Here she taught a class in design and from it emerged the Folly Cove designers, a group of internationally known professional artisans. She is the author of many classic children's picture books, including MIKE MULLIGAN AND HIS STEAM SHOVEL and KATY AND THE BIG SNOW.

"This is fun both in its text and gray crayon drawings. Mike Mulligan remains faithful to his steam shovel Mary Anne, against the threat of the new gas and diesel-engine contraptions, and digs his way to a surprising and happy ending." The New Yorker —