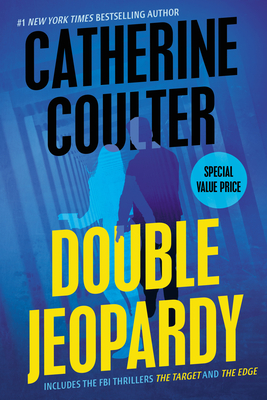 Other Books in Series

This is book number 2 in the An FBI Thriller series.

#1 New York Times bestselling author Catherine Coulter’s FBI Thrillers The Target and The Edge, together in one explosive volume.

The Target—Coulter “keeps readers guessing” (Booklist) as a little girl is pursued by men who prove as relentless as their motives are baffling. And FBI agents Savich and Sherlock must unravel the clues.

The Edge—In this “fast-paced thriller” (People), an FBI agent’s sister disappears after an attempted suicide. When Savich and Sherlock join the search, they discover a startling connection to a puzzling murder—and put their lives on the line to uncover the truth.
Catherine Coulter is the #1 New York Times bestselling author of more than eighty novels, including the FBI Thriller series and A Brit in the FBI international thriller series, cowritten with J.T. Ellison. She lives in Sausalito, California, with her Übermensch husband and their two noble cats, Peyton and Eli.
Praise for Catherine Coulter’s FBI Thrillers

“This terrific thriller will drag you into its chilling web of terror and not let go until the last paragraph…A ripping good read.”—The San Francisco Examiner

“A good storyteller...Coulter always keeps the pace brisk.”—Fort Worth Star-Telegram

“Fast-paced, romantic...Coulter gets better and more cinematic with each of her suspenseful FBI adventures.”—Booklist